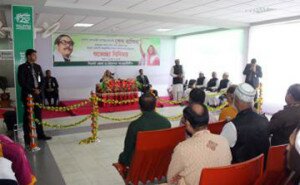 Prime Minister Sheikh Hasina on Thursday directed the leaders and workers of Bangladesh Awami League to strengthen the party at every tier and project the government’s tremendous success before the people.
“Strengthening the party at every tier is necessary. We have already formed teams to this end. So I would like to tell you to give proper attention so that the party is built organisationally and beautifully,” she said.
The Prime Minister gave the directives while exchanging opinion with leaders and workers of Sylhet district and city units of Awami League at the MAG Osmani International Airport during a stopover.
Sheikh Hasina, also the President of Bangladesh Awami League, made the one-hour stopover at the Osmani International Airport on her way to Dhaka from London this morning.
With Sylhet city Awami League President and former mayor Badaruddin Ahmad Kamran in the chair, the function was addressed by Sylhet District Unit AL Vice President and Sadar Upazila Chairman Ashfaq Ahmed and General Secretary Shafiqur Rahman Chowdhury and City AL General Secretary Asaduddin Ahmed.
Organizing Secretary of the Central Awami League Misbahuddin Siraj conducted the function.
Further highlighting the necessity of strengthening the party, the Prime Minister said after forming the government for the second time in a row, the Awami League government is facing various obstacles.
“We are going through many impediments as we completed the trial of killers of Bangabandhu and are holding the trial of war criminals,” she said.
In this connection, Sheikh Hasina said the aim of her government is to free the nation from stigma by finishing the trial of war criminals who committed genocide in 1971.
The Prime Minister said the country is moving fast towards economic prosperity and there is huge contribution of the expatriate Bangladeshis to this end.
Pointing out the agreement signed in Bhutan recently on vehicular movement between Bangladesh, India, Nepal and Bhutan, she said through the deal, Nepal and Bhutan are now connected with Bangladesh through road.
“The regional and sub-regional connectivity would contribute to our economy and expand trade and business with other countries of the region,” she said.
Noting the establishment of the BCIM Economic Corridor comprising Bangladesh, China, India and Myanmar, the Prime Minister said through this, a scope for economic uplift for the people of Bangladesh has been created.
Sheikh Hasina said upholding Bangladesh’s foreign policy –”Friendship to all, malice to none”, the country is solving all problems with its neighbours through discussion and peacefully.
In this connection, she mentioned the Land Boundary Agreement (LBA) and the Ganges Water Treaty with India and the maritime boundary victory over India and Myanmar.
While talking about the much-awaited LBA with India, the Prime Minister said Bangabandhu signed and ratified the agreement in1974 along with enacting maritime boundary demarcation act.
But after the tragic assassination of Bangabandhu, she said, subsequent governments of Zia, Ershad, Khaleda Zia and the caretaker government did not take any effective measures to this end.
“The land boundary dispute with India would have been solved much earlier, had Bangabandhu been alive,” she said.
Sheikh Hasina added that Bangabandhu not struggled for only achieving independence of the country, he did everything to run the country and government smoothly after independence.
Sheikh Hasina said the Awami League government assuming office in 1996 after 21 years, started implementation of various steps of the Bangabandhu government.
Responding to a proposal of Sylhet AL leaders to accord a reception to the Prime Minister for her various achievements including the implementation of the LBA, the Prime Minister suggested giving reception to three “Bangladeshis daughters” who were elected House of Commons members in Britain.
Three “Bangladeshi daughters”—Rushnara Ali of Sylhet, Dr Rupa Haque and PM’s niece Tulip Rezwana Siddique — were elected MPs in British general elections last month.
Extending her sincere thanks to the Sylhet people living in Britain, Sheikh Hasina said: “I have given reception to Tulip by presenting a bouquet and visited British Parliament to listen to her speech…it cannot be expressed in language.”
In an emotion-charged voice, the Prime Minister said she feels proud of Tulip. “You have all worked with utmost sincerity for Tulip and for this, I extend my heartfelt thanks to you,” she said.
The Prime Minister also illustrated her government’s steps for the development of Sylhet region.
In this connection, she mentioned the upgradation of Sylhet MAG Osmani Airport to an international airport, modernization of Sylhet Rail Station, establishment of a cantonment and development of the Dhaka-Sylhet Highway.
“Sylhet was once very neglected and there was development for only name. But after assuming office by the Awami League government, massive uplift took place,” she said.
Referring to current flash floods in some areas of Sylhet region which Sheikh Hasina witnessed from the Biman aircraft today, she assured that the government would take necessary measures to help the flood victims.
In this connection, Sheikh Hasina asked the party leaders and workers to stand beside the flood victims to lessen their sufferings.
At the outset of her speech, the Prime Minister extended her heartiest greetings to the countrymen and the Muslim Ummah on the occasion of holy Ramzan. –Our Monitor