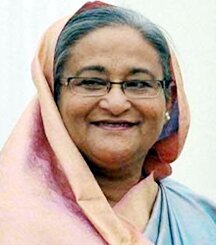 Bangladesh Prime Minister Sheikh Hasina returned home Thursday morning concluding her six-day visit to London. Bangladesh Biman flight-BG-016 carrying her and members of her entourage landed at MAG Osmani International Airport (OIA) in Sylhet at 10:05am.
After one-hour stay there the flight departed for Hazrat Shahjalal International Airport and landed in Dhaka at 11:43am.
Minister for Religious Affairs Principal Motior Rahaman and Expatriate Welfare and Overseas Employment Minister Engineer Khandakar Mosharraf Hossain were present, among others, at the airport to receive the Prime Minister.
During her stay in Sylhet, local Awami League leaders made call on Prime Minister at MAG Osmani International Airport VIP lounge.
Sheikh Hasina greeted the Awami League leaders and workers on holy month of Ramadan and exchange pleasantries with them.
Sheikh Hasina left Dhaka from London on June 12. She was accorded a civic reception by Awami League, the UK chapter during her stay there. She also joined a reception hosted by Keith Vaz, chairman of All Party Parliamentary Group on Bangladesh in the House of Commons.
The Prime Minister visited the British Parliament and observed the maiden speech of her niece and Labour Party MP Tulip Rezwana Siddique in the House of Commons.
Sheikh Hasina extended her heartiest greetings to the countrymen on the occasion of the holy Ramzan the same day. She extended the Ramzan greetings from a function at Sylhet Osmani International Airport.
Sylhet District and City Awami League jointly oragnized the function on the occasion of the PM’s stopover at the airport. Sylhet City AL President and former mayor Badaruddin Ahmed Kamran chaired the function. –Our Monitor