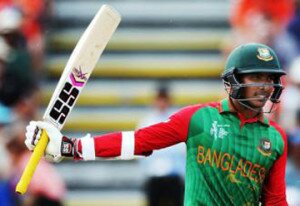 Bangladesh beat India by 79 runs with 24 balls to spare in the first ODI (One Day Internationals) Za’N Zee three-match series at the Sher-e-Bangla National Cricket Stadium at Mirpur in Dhaka Thursday night.
The visiting team scored 228 losing all wickets in 46 overs, while Bangladesh batting first, scored 307 runs.
Southpaw opener Tamim Iqbal scored his 30th half century against India in the first ODI of the three-match ODI series at the Sher-e-Bangla National Cricket Stadium at Mirpur.
The dashing left-handed opener pairing with Soumya Sarkar gave Bangladesh a solid start contributing 102-run for the opening stand paving the way to set up a massive total in front of strong India.
The left -handed batsman contributed a priceless 60-run by 62 balls that studded with seven delightful boundaries and a towering over boundary. He looked destined for a three figure mark but to the dismay of the partisan crowd, Tamim unnecessarily tried to loft Ravichandran Ashwin’s delivery and gave Rohit Sharma an easy catch at the long-off.
Probably rain, which stopped the play for an hour, saw Tiger batsmen lose their concentration as they lost quick three wickets in succession in shape of Tamim Iqbal, Litton Das and Mushfiqur Rahim soon after resumption.
Debutant Litton Das (8) failed to make his debut ODI match memorable as he was trapped leg before wicket by Ashwin’s delivery while Mushfiqur Rahim (5) departed cheaply, leaving Bangladesh in deep trouble.
Earlier, Soumya Sarkar was sent back to the pavilion by run out after scoring a brilliant 40-ball off 54-run that studded eight boundaries and one over boundary.
Opener Soumya Sarker hits his second career ODI half century against India during the first ODI of the three-match ODI series at the Sher-e-Bangla National Cricket Stadium at Mirpur.
The left handed batsman smashed 40-ball off 54-run before he was fall victim of run out by the direct throw by Suresh Raina, after pairing 102-run breezy opening stand with Tamim Iqbal to give his team to a solid start. His cracked eight boundaries and a towering over boundary.
His first half century came against New Zealand last year while he scored only ODI century against Pakistan in his previous match in the home series against Pakistan last month.
Prime Minister Sheikh Hasina extended her heartiest congratulation to the national cricket team for crushing India in the first one-day international (ODI) match.
In a felicitation message, the cricket-lover Prime Minister extended her heartiest greetings to all concerned including manager, coach and cricket board officials side by side with the national team for this stunning success.
She said Bangladesh’s cricket has now been placed at dignified position on the world stage thanks to highest sincerity of the government for the development of the cricket and as well as sincere efforts of the players.
Sheikh Hasina also hoped that the national team would keep the trend of the victory ongoing in future. –Our Monitor