Bir Shreshtha Ruhul Amin Day was observed here in Noakhali on Wednesday. Noor Jahan, daughter of the hero formally inaugurated her father’s 43rd death anniversary and Bijoy Mela. The inaugural function was enriched with the presence of a good number of freedom fighters. Later a brief discussion was held at the Bijoy Mela manch. 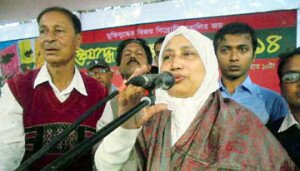 The program was presided over by Sadar Upazila Chairman Advocate Shihab Uddin Shaheen. Zila Muktijoddha Commander Mojammel Haque Milon, Bijoy Mela Udjapan Parished Secretary Momtajul Karim Bacchu, freedom fighter Abul Kashem, Advocate Mominullah, Nizam Uddin Pintu and Emdad Hossain Koisor, among others, spoke on the occasion. On the other hand the 10-day Bijoy Mela began here and 100 stalls were set up at the venue. It may be mentioned here that in 1971, six days before the victory. Ruhul Amin was fighting in a Navy ship and was killed in bombing by Pakistan army at Rupsha base in Khulna. After the barbaric crackdown of 25 March, he left his place of duty and returned to his village home. Then he organized the students and youths of the village and imparted military training to them. On 10 December 1971 while he with his team was trying to capture PNS Titumir at Mongla Port with three Navy ships then Pak four aircrafts flew over the convoy. After a few minutes, those aircrafts first bombed Padma and then Polash—two Navy ships. Ruhul Amin sacrificed his life for liberation like a hero. –News and Photo: M Chowdhury