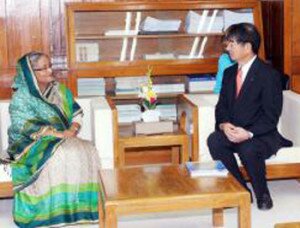 Prime Minister Sheikh Hasina said there are many areas where Bangladesh and Japan can work together for the mutual benefits of the two peoples.
She said this at a meeting with Yanagisawa Kyoei, president of International Manpower Japan (IM Japan) at her Jatiya Sangsad Bhaban office in Dhaka on Wednesday.
Briefing reporters after the meeting, Prime Minister’s Press Secretary Ihsanul Karim said Yanagisawa informed the Prime Minister of giving training to Bangladeshi youths by Japan in various technology-related sectors.
At the preliminary stage, 10 male and 10 female youths completing their secondary education would be given such training, he said adding that more youths would get the chance next time.
She said Ultra Supper Critical Thermal Power Plant in Matarbari of Maheshkhali and Deep Sea Port at Sonadia would be the areas where the trained youths would find their jobs. Besides, the training would help the youths to be developed as entrepreneurs.
Sheikh Hasina said Bangladesh and Japan held an elaborate discussion on the areas of cooperation during her visit to Japan last year and return visit of the Japanese Prime Minister to Bangladesh.
Terming the youth-folks of Bangladesh as very talented and efficient, Sheikh Hasina said, they would be able to contribute to the economy of the both countries if they get proper training.
The Prime Minister said, Japan is a role model of development for Bangladesh particularly for its tremendous success in agriculture sector.
Talking about preservation and extraction of fish and other resources from the huge sea area of the country, Sheikh Hasina said, Japan can help Bangladesh to this end. In this regard, she stressed the need for taking necessary steps from the Japanese side in protecting Tauna Fish as Japan has suitable technology for this.
‘IM Japan’ President said his country would take energetic youths of secondary level from Bangladesh who will be given training on entrepreneurship in various technologies related sectors.
Expatriates Welfare and Overseas Employment Minister Engineer Khandaker Mosharraf Hossain, Principal Secretary Md Abul Kalam Azad and Secretary of the Ministry of Expatriates Welfare and Overseas Employment Khandker Iftekhar Haider were present.