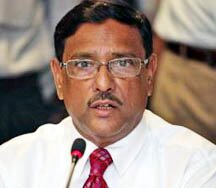 Road Transport and Bridges Minister of Bangladesh, Obaidul Quader, on Monday dismissed all speculations about ruling Awami League’s plan to split the BNP saying that BNP (Bangladesh Nationalist Party) is not a cause of concern for the AL.
“The government is running the country with an ease and determination and the BNP has no more a cause of creating discomfort for it. So, the ruling party has no plan to split the BNP,” he said after inaugurating two foot-over brides at Lalpul area on Dhaka-Chittagong Highway in Feni.
Both of the bridges have been constructed at a cost of Taka one crore under the project of Dhaka-Chittagong four lane highways.
“A total of 33 foot-over bridges will be constructed from Dhaka to Chittagong under the project,” Quader, also a Presidium Member of the AL.
The construction work on Dhaka-Chittagong four lane highways will be completed by this December, he hoped. Speaking about the recent reshuffle in the cabinet, the minister said, “It is a routine work and it is the only authority of the Prime Minister and Jatiya Sangsad leader.”
On the other hand, a political analyst when asked about the comment of the minister, replied that Mr Quader has expressed the reality. BNP is in no way a headache for the government now, he added.
In reality, Awami League leaders and the govt ministers collectively played the role of the publicity unit of BNP for the last six months and due to that BNP is still in the discussion even having no successful or clear program during the period, the political analyst, on condition not to be named, told this correspondent. –Staff Reporter