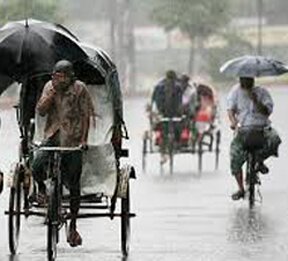 Dhaka, the capital city of Bangladesh, Sunday witnessed a deserted look as most of its dwellers left the capital for their native places to celebrate the Eid-ul-Fitr, the greatest religious festival of the Muslim community, with their dear and near ones. You can get explanation with the materials that can be found on the main page of one of our letter writing services at https://topwritingservice.com/letter-writing-service/.
Besides, incessant downpour since Saturday evening paralyzed the normal life apparently forcing the few city dwellers to stay indoors.
Some areas of this busy capital turned into a ghost heaven as most of the tenants who went home for Eid celebration kept their rented-house under lock and key.
Witnesses said many amusement parks failed to attract satisfactory visitors as the rain has become a pain for them even on the Eid occasion.
Apart from this, a quite unusual scene was seen at Sayedabad and Gabtoli bus terminals with the presence of homebound passengers but it is fewer than the other busy days.
Ticket-sellers and transport staff were seen having a leisure time at the busiest bus terminals otherwise. “Almost all bus terminals witnessed very few travelers today as most of the people left Dhaka on Wednesday and Thursday,” said Abdul Khaleque, a staff member of Sakura Paribahban (Dhaka-Patuakhali route).
The capital started experiencing fewer crowds much earlier before the three-day Eid holiday as the country witnessed protracted weeklong holidays coinciding with the Shab-e-Qadr and weekends. Most of the city dwellers, who wanted to celebrate their Eid with the relatives at their respective native villages, started leaving the Dhaka since Wednesday last.
According to the government calendar, the three-day Eid holiday will end Sunday.
“It’s a different Dhaka… the usual tailback and gathering on the bus stands as well as bus terminals, rail station and Sadarghat launch terminal were not seen today,” Raton, a guava vender, told this correspondent in front of Baitul Mukarram National Mosque.
City dwellers and passengers of the buses expressed their satisfaction over the prevailing situation in the city streets though they are little scared of the snatching and robbery at this moment.
The members of law enforcement agencies, including Rapid Action Battalion (RAB) and police, earlier assured the people to maintain their strict security vigils to avert those criminal activities.
Adnan Babu, a senior officer of Sonali Bank, who works at the Ramna Branch, said, “I was born in Dhaka 45 years back. This is the real Dhaka that was before a few years. There is no traffic congestion and huge gathering on the bus stoppage.”
The road communication has tremendously developed ahead of this Eid as the road transport and bridge minister was working round the clock to ease the traffic congestion and to repair all dilapidated roads on an urgent basis, he observed.
Echoing with the remark, a passenger of a bus of Sonargaon Paribhabhan (Gulisthan-Sonargaon route) said, “For last two days, we can save more time as there is no traffic jam on the street. Besides, like previous occasions, police were not seen taking toll here and there halting vehicles and trucks on the highways this year.”
Visiting Sayedabad, the main bus terminal which is used to travel to the country’s northeast, south and southeast, bus terminal, the terminal was today found almost deserted.
The Gabtoli Bus Stand, witnesses said, also got a similar look.