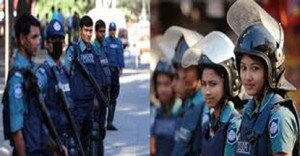 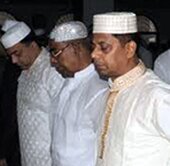 A total of 1.25 lakh police personnel didn’t get government holiday during the Eid-ul Fitr, the biggest religious festival of Muslim community, as they were deployed to provide security to the celebrants at streets, Eidgah, residents, public places and recreation centers.
A press release of Police Headquarters, signed by its AIG Mohammad Nazrul Islam, said in Dhaka on Monday that Prime Minister Sheikh Hasina thanked Bangladesh Police for its proper role in ensuring security to home-bound people and entire Eid-festivity. In a message to Inspector General of Police (IGP) on the day of Eid, she conveyed the thanks.
IGP AKM Shahidul Hoque also thanked all members of police for their active role to ensure public security during the Eid-ul-Fitr.
“People’s additional enjoyment or sufferings means our additional duty. It is our pleasure to lessening sufferings of people to ensure happiness to them,” the IGP added.
Another media release of the Police Headquarters said: IGP AKM Shahidul Hoque attended the Eid congregation at Rajarbagh Pilce Lines. Chiefs of different units, high officials of the department, members of the force and other musllis also attended the Eid jamaat there.
After the Eid jamaat the IGP exchanged Eid greetings with the police personnel there. – Our Monitor (Photo: PHQ)