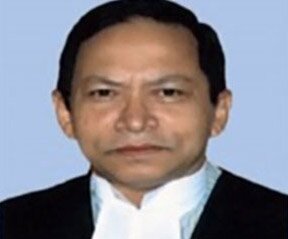 Chief Justice Surendra Kumar Sinha (SK Sinha) on Saturday urged all concerned including judges and lawyers to be more sincere and responsible for reducing harassment of justice seekers.
The chief justice made the remarks while speaking as the chief guest at a seminar titled ‘Role of Bar and Bench in establishing rule of law’ organized by Human Rights and Peace for Bangladesh (HRPB) at Supreme Court Ainjibi Samity in Dhaka.
Justice Sinha said the justice seekers get defeated in 60 to 70 per cent of the cases only due flaws made by the lawyers. “A lawyer is the architect of a case. A case will be designed as per the wish of the lawyer,” he added.
He said some lawyers don’t pay much attention to the information given by his or her client.
The chief justice alleged that lawyers do not remain present after lunch time at lower courts. “If there is a strict judge, the lawyers start to stage a movement to remove that judge. If the situation goes on like this, the backlog of cases will continue to increase,” he said.
The chief justice said he has already issued an order that a case will be dismissed, if the lawyer is absent.
Noting that there are 28,30,000 pending cases at the lower courts, he said training program needs to be conducted for the judges to reduce the backlog of cases.
The chief justice urged the journalist to write about the judiciary system after acquiring proper knowledge. “Do criticism and find out the truth. But don’t make misleading explanation,” he said.
Barister Moin Firozi presented a set of recommendations for improving relations between Bar and Bench.
Presided over by HRPB President Advocate Monjil Morshed, the seminar was also addressed by Justice Awlad Ali, Justice Kazi Ebadul Hoque, senior lawyer of Supreme Court and Presidium member of Awami League Yusuf Hossain Humayun and senior lawyer Abdul Baset, among others. –Our Monitor