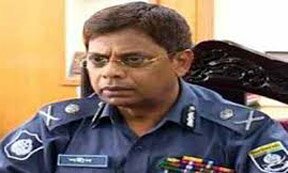 Inspector General of Police (IGP) of Bangladesh, AKM Shahidul Hoque, on Saturday sounded a note of warning against human trafficking and drug smuggling, saying, “None, whatever powerful they might be, will be spared if found involved in the heinous acts.”
“If involvement of any policemen is found in such acts, they will surely face stern action,” he said while addressing as the chief guest at a discussion meeting denouncing the human trafficking as well as drug smuggling and for creating awareness among the people about its adverse impact.
The discussion was held at the hall room of Cox’s Bazar Cultural Centre with Cox’s Bazar Police Super Tofail Ahmed presiding.
Among others, DIG of Chittagong range Md Shafiqul Islam, DIG of Highway Police Mallik Fakhrul Islam, Zonal Commander of Chittagong East of Coast Guard Captain Shahidul Islam, and Cox’s Bazar Sector Commander of BGB Col Md Khalekuzzaman and RAB-7 Commander Lt Col Miftah Uddin Ahmad, were present on the occasion.
The police chief called upon all to come forward to fight the evils, as the drugs have been ruining the nation. He asked the policemen to show zero tolerance toward drug traders and human traffickers.