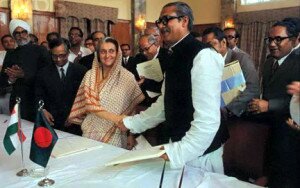 (At https://cheap-papers.com/buy-term-papers-online.php any student is free to get additional help or even an option to buy term papers online.)

Bangladesh Prime Minister Sheikh Hasina on Thursday extended her heartiest greetings to her Indian counterpart Narendra Modi on the passage of the historic Land Boundary Agreement (LBA) between Bangladesh and India by Lok Sabha.
“Prime Minister Sheikh Hasina extended her sincere greetings to Indian Prime Minister Narendra Modi on her own behalf, the government and the people of Bangladesh for adoption of the historic LBA Bill in the Lok Sabha, the lower house of parliament, when the Indian Premier phoned Sheikh Hasina this evening,” PM’s Press Secretary AKM Shameem Chowdhuri told newsmen.
The press secretary said the Indian Prime Minister made the phone call to Prime Minister Sheikh Hasina immediately after the passage of the bill by the Lok Sabha and apprised her of the matter. Narendra Modi also congratulated Sheikh Hasina on the passage of the LBA.
“Your father and Bangladesh’s Father of the Nation Bangabandhu Sheikh Mujibur Rahman signed the landmark Land Boundary Agreement (LBA) with the then Indian Premier Srimati Indira Gandhi to exchange areas and people on either side of the border on May 18 in 1974 and the LBA Bill has been passed in the same month during the tenure of your government,” Modi told Sheikh Hasina.
The Bangladesh Prime Minister also extended her heartiest congratulations to Indian President Pranab Mukherjee, Opposition Leader Sonia Gandhi, Indian government, the members of Lok Sabha and Rajya Sabha as well as the people and administration of India for passage of the LBA Bill.
In this connection, Sheikh Hasina said India is a tested friend of Bangladesh. “India was always beside Bangladesh during its bad time and is still with its neighbour.”
Prime Minister Sheikh Hasina also greeted all enclave people on this historic occasion and directed the administration to ensure their security and welfare.
She said with the passage of the LBA Bill, the commitments of the two celebrated leaders of the sub-continent meaning the world have been implemented.
Sheikh Hasina hoped that the LBA between Bangladesh and India would set up a new milestone in developing inter-regional relations.
She wished continued progress and prosperity of Dhaka-New Delhi friendly ties.
The Lok Sabha Thursday unanimously passed the historic Land Boundary Agreement (LBA), completing the stamp of approval by Indian parliament to settle the more than four-decades-old land boundary and enclave exchange issues.
The bill was unanimously passed by Rajya Sabha, the upper house of Indian parliament, on Wednesday.
The same bill was okayed by Lok Sabha, the lower house of parliament, around 6:10 pm (Indian time) Thursday.
Narendra Modi the same day commented that a historic milestone has been reached in India-Bangladesh relations after the passage of constitutional amendment bill regarding the land boundary agreement (LBA) with the neighbouring country.
“Today, a historic milestone has been reached in India-Bangladesh relations after the passing of the Constitutional Amendment Bill by Parliament,” he said in a series of tweets after the Lok Sabha, the lower House of Indian Parliament, passed the bill Thursday afternoon.
The Indian premier also said that “The bill ensures a permanent settlement of land boundary issue with Bangladesh”.
In his tweet, Modi wrote, “This would contribute to a stable and peaceful boundary, better management and coordination of the border and will lead to enhanced security as well.”
“This reflects the collective will of the nation to build constructive relations with our neighbours,” Modi added. –Our Monitor